9. A Trio of Voices; Iris Insists 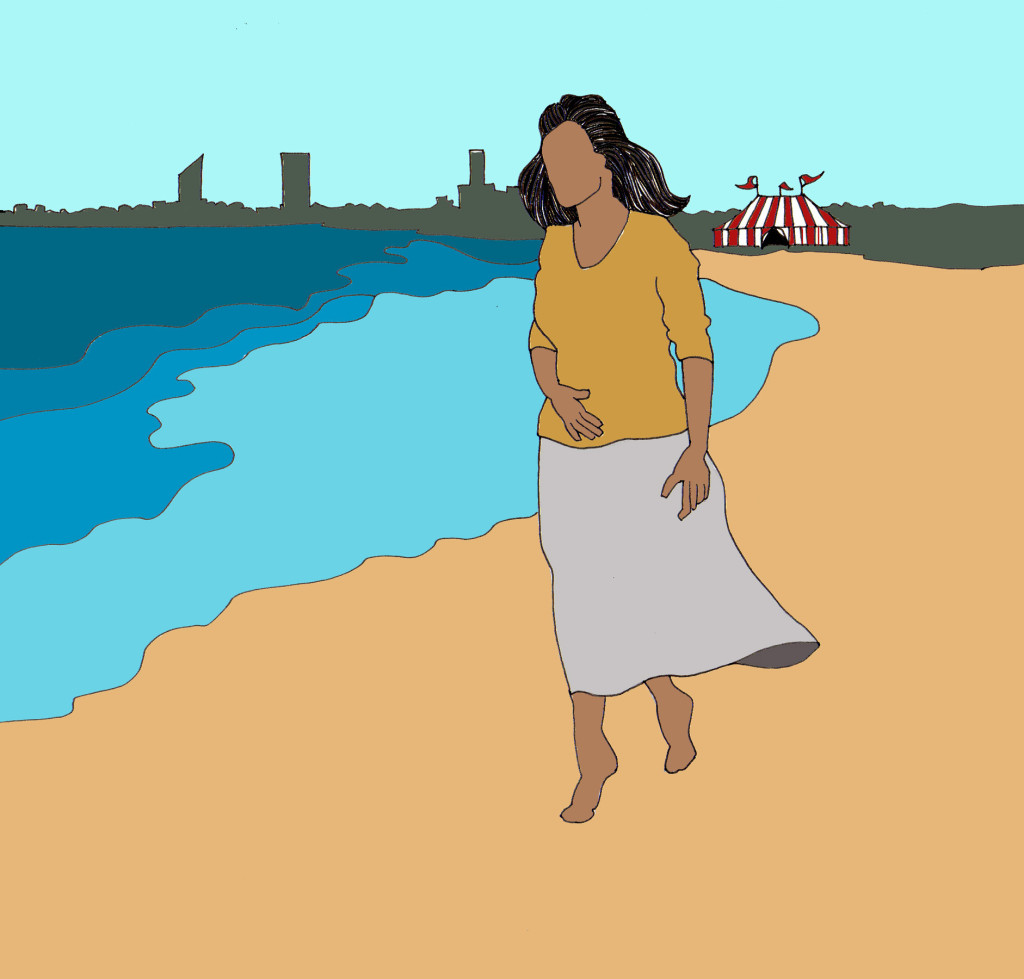 “WHAT WAS THAT?” asked Jenna as they crossed the street.

“What was what?” asked Florencia, although she knew perfectly well what Jenna was referring to. She started to walk faster; glimpses of sparkling blue water shimmered at the end of the street, past a parking lot.

“That,” insisted Jenna. “With that guy. VC’s friend. I haven’t seen him before. I wonder if he’s a trainer at Gold’s Gym. He sure looked like he could have been a trainer.”

“I don’t know what you’re talking about,” said Florencia, even though her whole body still felt warm. “So, how do you know VC?”

Jenna made a face. “He lives down the street from us, in one of those new houses. He’s a slimeball.”

Down the street from us. It was so easy for Jenna to say, as though it were a done deal. Florencia rolled the word around on her tongue. Being part of an us felt strange and sweet, like an unfamiliar fruit.

“He’s a record producer,” Jenna continued. “But don’t ever ask him about it, or you’ll be stuck listening to a list of all the–” Jenna made air-quotes, “–famous people he’s produced. Anyway, you’re changing the subject.”

“Jenna,” said Florencia firmly, “it was nothing.”

“That was so not nothing, and you know it.”

Hurry up! cried Iris. The beach! It’s right there; why aren’t you running?

Shush, Florencia chided. It’s not going anywhere. I don’t like to run.

But it’s the beach!

Despite herself, Florencia sped up.

Florencia couldn’t tell if the elation that welled up belonged to her or Iris, although she suspected it was a little of both. She had seen pictures of the ocean, of course, and watched plenty of movies, but those didn’t transmit the movement, the swell, the sheer power. Or the way the crash of waves mixed with the voices of surfers and the cries of gulls to make the perfect background noise. Or the sheer vastness, which surprised her in the way few things did.

The unborn daughter inside of her was reverentially silent. Florencia put one hand on her stomach. Jenna glanced at her, and then out at the water.

“So,” said Jenna, as though it didn’t matter at all, as though she had just thought of it, “how’s Billy?”

Other than their first phone call, Billy Doheny had been conspicuously absent from their conversations. Florencia had known it might come up again, although when Jenna showed up at the airport without Billy’s ring around her neck, Florencia had hoped it was all in the past. But now here it was.

“He’s better than most folk,” said Florencia. “I don’t think he really needs to stay in Happy Home. I think he just wanted to be sure.”

Jenna stared at the horizon. A sailboat glided past, leaning into the wind. “My mom told me when he checked himself in,” she said. The fact that Florencia, in accordance with the privacy agreement she had signed, had never told Jenna that Billy was there, hung unspoken in the air. “Was he…I mean, is he okay? Really okay? My mom said he was hearing voices…”

Florencia gave a short laugh. “Jenna, do you know what Billy’s voices were telling him to do?”

Jenna shook her head, a tiny movement. She looked terrified.

“He has three voices,” Florencia said matter-of-factly. She had found that this was the best way to address topics that might scare people. “One of them, the male one, tells him to go to Kmart and pay for everyone’s shopping. It particularly likes to give presents. The other one, a child, just wanted to go to the library and read all day. He named that one Little Billy. The last one, the female one–”

“Most people who hear voices have them in both genders,” said Florencia. “It’s totally normal.”

“I’m sorry,” said Florencia. She had grown used to the way the mind could twist on itself, could create alternates or reasons or entirely new existences. It didn’t scare her, but she forgot it wasn’t as comfortable for most people.

Jenna shook her head again, as though to clear it. “I hate thinking of him going through that all alone.”

Florencia cradled her belly, drew a circle in the sand with her toes.

“I didn’t mean that,” said Jenna instantly. “Oh God, I’m sorry. Of course he wasn’t alone. You were there, and his brothers and sisters, and, well, probably everyone else. I’m sorry.”

They watched as the sailboat changed tack, its bow struggling through the waves. Florencia thought about Billy’s third voice, the hopeless romantic who wanted him to get married and have babies and was always telling Billy to go to LA, find Jenna, make it work. It was just as well Jenna hadn’t let her finish.

Florencia shaded her eyes and scanned the beach. Off in the distance stood a red and white tent festooned with colored flags. She thought she saw a lone figure rappel down its side.

Jenna followed her gaze. For the first time since Billy had come up, her face softened. “Oh. It’s this new circus. I went with Afa last month. It’s pretty good. Totally different from Circus Rose where we met.”

“No elephants,” said Jenna. “There are still some scary-ass clowns. Hey, you want to go?”

Florencia stood still, contemplating how to answer this question as something akin to an explosion of excitement went off inside of her. “Not really,” she said truthfully. “But Iris does.”