8. An Unexplained Connection; The First Glimpse 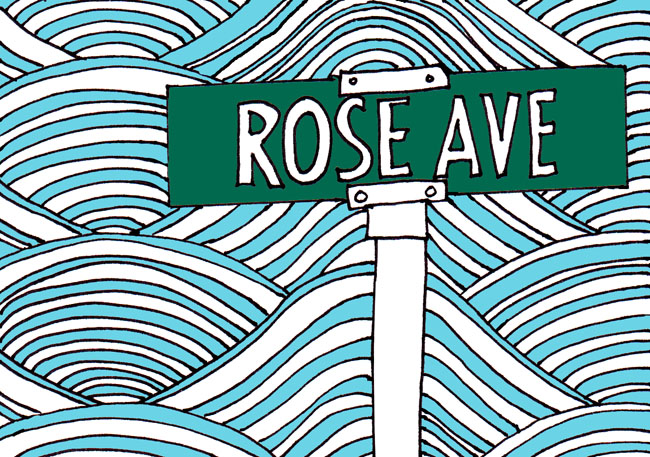 Jenna’s apartment stood on a corner. Its official address was on Sixth Street, but most of the building ran along the other street.

“I can’t believe you didn’t tell me you lived on Rose Avenue,” said Florencia.

“I almost didn’t take the apartment.” Jenna took a sip of her breakfast, something green and disgustingly thick and smelling of spinach. “No escaping from Rose, I guess.”

Florencia wrapped her hands around her coffee cup, letting the wonderful, bitter smell ground her, glad that Jenna hadn’t insisted Florencia taste the vegetarian sludge she was now drinking instead of caffeine. “I thought you liked Rose.”

Jenna made a sound like a snort, which she always did when she thought what you were saying was ridiculous. It was one of the many things Florencia loved about Jenna, that someone so delicate and graceful-looking could snort like that. “I liked you,” she said. “And Billy. And that one meadow was okay, the one where Billy and I used to…you know. Hang out. But I hated Rose.” Jenna took another sip of her liquid spinach and made a grand gesture, taking in the whole street, the whole city. “This is where I belong. Don’t you just love it, Florie?”

It was only her first day in the city, but Florencia did, in fact, love it. She herself had liked Rose just fine, but she hadn’t known, not really, that there could be so many people, so much life. And the weather! This morning, still on Nebraska time, she had woken up before dawn and wandered into the living room, watching the light change as the sun rose. It was February, but they hadn’t even had to turn the heater on. And when Jenna stumbled out of her bedroom, barely awake, she had been barefoot.

What wasn’t to love?

Normally, the answer to this would be a resounding yes. Florencia preferred to have everything orderly and neat before doing anything else. But the barely-there daughter inside of her did the tiniest of flips and voiced a small, unspoken “Hooray!” It was both adorable and a little disconcerting. Florencia pushed down her own preference, as she knew she’d have to learn to do, and said, “Unpacking can wait. Let’s go.”

Jenna widened her eyes and grinned. “Wow,” she said. “You sure? That’s pretty wild! Better be careful, or you’ll turn into one of those loosey-goosey hippie types!”

“When in Rome…” said Florencia, grinning right back. With a shock, she realized it was the first time she had smiled for real in as long as she could remember.

“Jenna!” called a male voice. A pale man with straggly blond hair jogged up and went to give Jenna a hug. Next to him, his jogging buddy—broad-shouldered and handsome and so dark his skin seemed to shine—jogged in place a few steps back. “Where you been, sexy?”

“Oh, hey, VC,” said Jenna vaguely, doing her best to avoid the sweaty hug. “I’ve been getting ready for my friend to get here. VC, this is Florencia. Florencia. VC.”

VC’s jogging buddy leaned in and said, in a deep voice that sounded like a radio announcer, “Excuse me. VC, I’ll meet you back at Gold’s.”

“Sure thing, man,” said VC, his attention still on Jenna. “So, sexy, when you meeting me for that drink?”

“I’m kind of busy,” said Jenna brightly. “Did I mention my friend is here?”

Over Jenna’s shoulder, VC’s jogging buddy caught Florencia’s eye and gave a rueful shake of his head and a small, “What can you do?” gesture.

Later, when Florencia remembered that first moment, she wouldn’t be able to say what had happened. It wasn’t love. It wasn’t even lust. It was, instead, a pure and instant recognition that shot up the back of her knees and into her chest, setting off heat like a chemical reaction. When she had been in LA longer, she would hear people describe this kind of thing by saying, “I must have known him in a former life,” a phrase Florencia refused to utter even when she had lived in Venice long enough to be considered a native.

But right now, in this life—the only life Florencia knew for sure she had—she let herself watch the muscular back of the man as he jogged away, and she wondered who he was. At least, until her daughter’s impatience slammed into her like small, pushy hands.

Iris wanted to see the beach, and she didn’t want to wait.

This was going to be a long pregnancy.