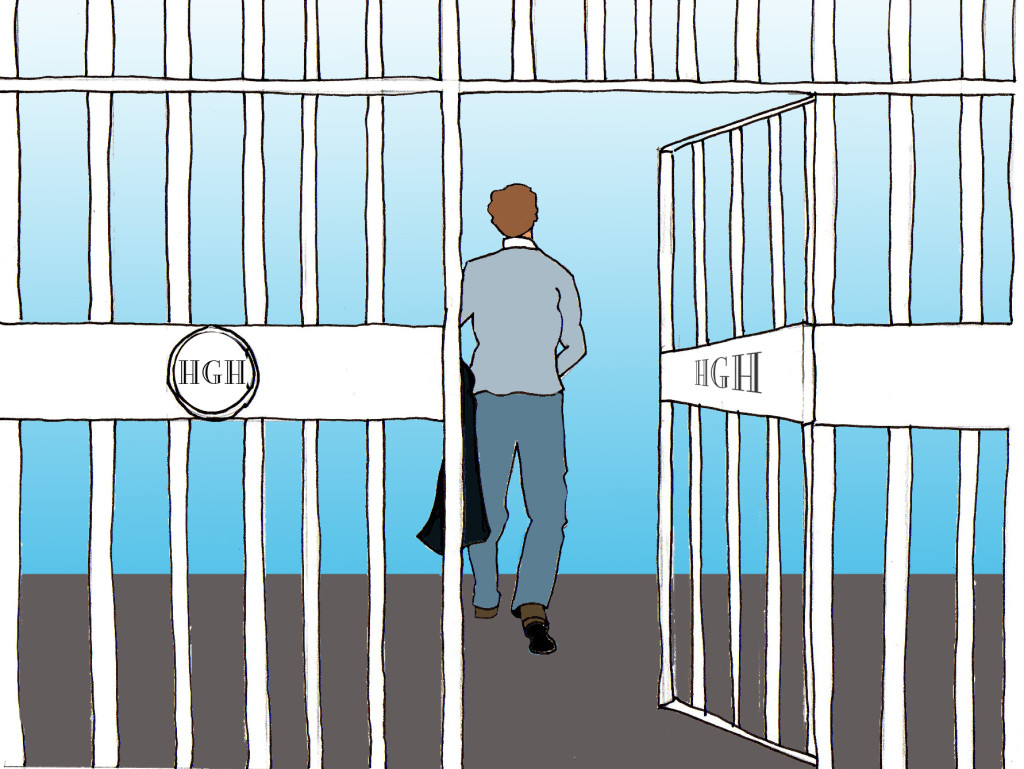 He had started running when he was twelve, before his mother had gone crazy, back when the signs were there but no one knew how serious it was. Every time the bad things in his house started, he slipped out the front door and ran as hard as he could around the block, over and over, until he could barely see for the sweat pouring down his face. Only then did he know it was safe to go back in, because he was somehow transformed, somehow protected by movement and exhaustion. He didn’t know how that worked, only that it did. Ever since then, running was home. He knew it was probably something he should examine. He understood the symbolism of running away, of running toward. But for this one thing, he let it be what it was. Salvation. Sanity. Peace.

He usually ran at dawn, but since getting released from Happy Grounds he’d been experimenting with nighttime. There was something about the track at night, something simple that he found to be a relief. Tonight the grass and dirt were pricked with raindrops. It had showered earlier, and the water still clung to the ground, sending off a cool dampness. He jogged a few times in place, watching his breath mist the air.

“Dude, what the hell you doing out here so late?”

Billy nearly jumped out of his skin. “Mark,” he said, trying not to let his little brother see how startled he had been. “God, man. You scared me.”

Mark slapped him on the back. He wore a muscle T and sweats, his thighs bulging through the fabric. When had his little brother gotten so buff? “I been looking for you. Breanna needs to know if you can take her to that tournament. She has to tell coach by the end of the day, and that’s in…” Mark made a big show of studying the watch he wasn’t wearing. “…about an hour.”

“Right.” At age sixteen, their sister Breanna was the star quarterback of the Rose High women’s football team. Sometimes it made Billy’s head hurt to think about how proud their father, a die-hard fan, would have been to see her play. All of them had been surprised when, at age twelve, the girl who loved Barbies and pink announced she wanted to join a football team, and even more so when she was the first pick for every team—boys’ teams included. Now it seemed she was unstoppable. Not only was she the quarterback, she had been on the homecoming court this year, and she was as smart as Billy if not smarter. He prayed every night she would never hear voices. One of them with the family curse was enough.

“How about you take her,” said Billy. “Give that truck of yours something to do other than go thirty on these first roads.”

Mark stuck his hands in his pockets. “I have something I gotta do,” he said, staring at the ground.

Mark kicked at a wet patch of grass, sending a spray of water up Billy’s pant leg. “No,” he muttered.

“I could use a hand here, man. You know I’m not supposed to travel yet.” This wasn’t, actually, true, but Billy had told everyone that as soon as he got home so no one would suggest he “get away for a while.” The idea of leaving Rose right now made him queasy. It felt too ungrounded, too lost.

“No, it’s not okay,” retorted Billy. “You need to help out, bro. I’m not exactly a pillar of health, in case you hadn’t noticed.”

Mark’s face grew mottled red. For a moment, Billy thought he might take a swing. But instead, he turned and went back to his truck, wrenching open the door. “For your information,” he yelled, his jaw tight, “I can’t go because I’m starting the police academy. Yeah, that’s right. Little brother actually has something real going on. And don’t apologize!” he shouted as Billy, stunned, opened his mouth. “I don’t want to hear it.”

Mark took off so fast, his tires squealed on the pavement.

Billy stood in the wet grass and listened to the sounds of the night. The police academy. Was that better than the Army? He stared at the track, not sure if he felt like running anymore. Off in the distance, a bird landed on the grass, its feathers shining pale in the moonlight. It was joined by another, and then a third.

He would have to take Breanna to her tournament. It was an important one, and she had showed him the paper with all the information weeks ago, eyes alight with excitement. He should have told her then that he would take her, but he was too thrown by the location.

Los Angeles didn’t even have a football team. What was it doing hosting an all-girls tournament?

With a sigh, he started to run. He would feel better afterwards, and then he’d call Bree and tell her she could go.

As he rounded the track at the other side, he noticed with mild interest that the birds on the track were seagulls.